RIYADH: The Jordanian ruler, King Abdullah II, has called on business and world leaders to invest in his nation’s youth, saying that while they account for a small proportion of the region’s population, they still played a significant role.
He said young Jordanians “speak the same language” as the Saudi leadership.
“They are the key to the future,” he said on Tuesday during his short speech at the Future Investment Initiative 2019 conference in Riyadh.
“We in the region recognize the need to nurture our young people’s skills and to harness them,” he said, adding: “My country strongly believes in this, they are the inventors of tomorrow.”
Acknowledging the small size of the Jordanian population, he said: “Jordanians may only cover 3 percent of the region’s youth, but they are 27 percent of the innovators.”
King Abdullah said his nation had 160,000 engineers and other skilled young workers who could help to improve cybersecurity and much more.
“Our youth, the youth of this region are looking to you,” he said.
Then he called on delegates at the conference to invest in the younger population.
“With your vital resources and our precious human capital there is not limit. We look to take flight into a hope and prosperity of which we can all share.
“This is a business opportunity that we cannot miss.” 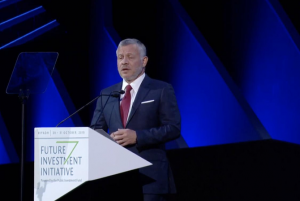